“Pictures just come to my mind and I tell my heart to go ahead.”  Howard Pippen

At the Douglas Coupland exhibition, everywhere is anywhere is anything is everything, there was not a wall or a room that wasn’t amazing and transformational to me, and I was excited that so many other people were there, talking about ideas, smiling at strangers, and as excited about what it might mean to be human in the 21st century, to be connected nomads, to be Canadian, to be moved by the beauty of expressed ideas that were questions posited as statements, to be…  thinking and moving.  I was even more delighted when little kids ran into the gallery with their teachers trying vainly to civilise them into acceptable gallery-going behaviours, watching them obey and make neat little lines of attentiveness and then rupture and scatter, an explosion like startled laughing birds, and joy.  I had the sense that they were the performative element of the exhibit.

While I was looking at a wall of paintings of aphorisms for contemporary life, a small group of children surrounded me, with their teacher.  They were pointing and looking and then the teacher shushed them and she looked kind of hopelessly at the wall, like it was all beyond her ken, and said, “Right then, shall we count the pictures?  How many pictures are there?”  What?

One of the kids said “Twelve, it says, ‘twelve’ right there on the title.”  “Right then,” she looked bewildered and harassed.  You could see she’d had no idea what she was getting into, coming here.  What to make out of “Knowing everything turns out to be slightly boring”?  “Who can count the number of colors he’s used?”  And then, she, too, became part of the performance for me.

Ultimately, such thinking leads us to the absurdity of Ursus Wehrli’s works, in which he takes paintings apart, and stacks up the bits.  In this Matisse it’s an interesting exploration because the results are still “artful” – reduced from narrative image to a stack of blue shapes, it’s still beautiful.  It’s still, pretty much, recognizably, “Matisse,” and “art.”   It’s perhaps Matisse’s signature, also reduced to a stack of black squiggles, that makes us wonder –  does this stack of squiggles still “mean” Matisse? 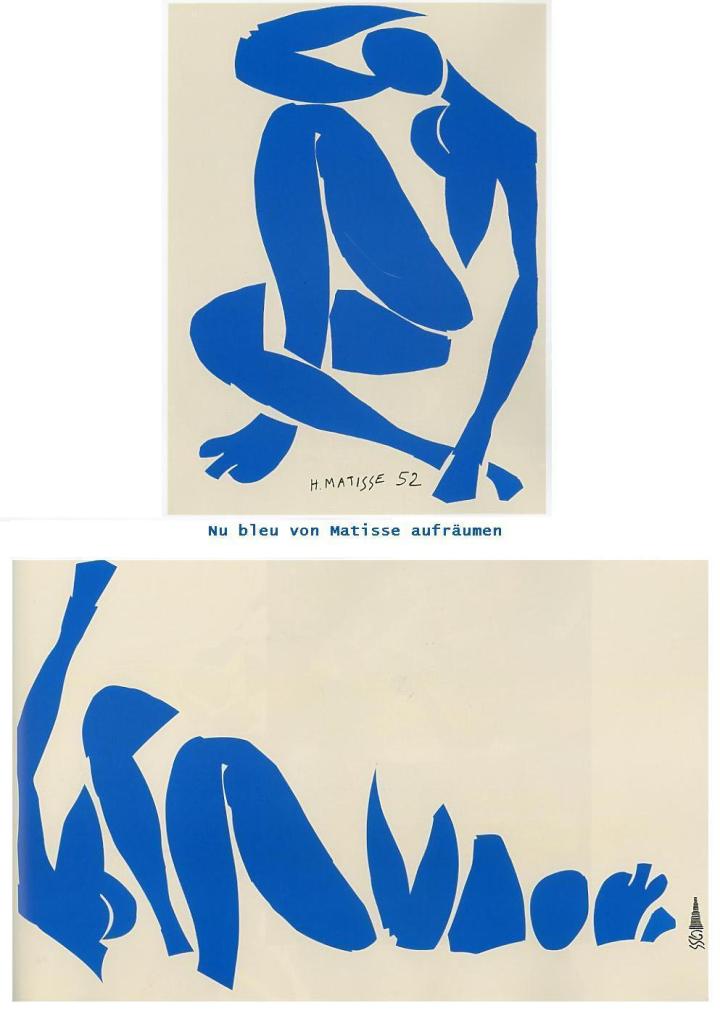 And then he goes a little  further.  Jackson Pollack, “neatened up” the extent that the paint of the painting is stuffed back into the paint cans.

Eigon Schiele’s amazing drawing, so powerful because of the lyrical line that looks like his pen didn’t leave the paper once but just danced in a single movement…  turned into a skein of yarn. 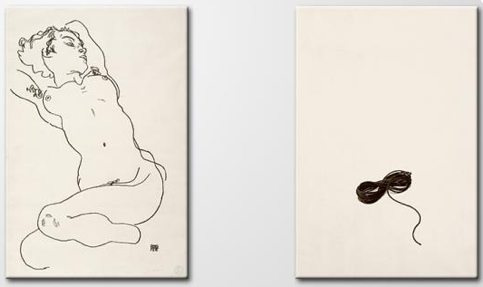 The unquestioned penchant for quantification and how it affects our communication is perhaps best expressed in this Werhli work in which ideograms are broken into lines and grouped according to size.  What was meaningful – what might have gathered us or started a dialogue or simply instructed us (I have no idea what it says) is now simply stacks, rendered meaningless as a sign, but bringing into question our actions.

But what about when such counting affects our lives? 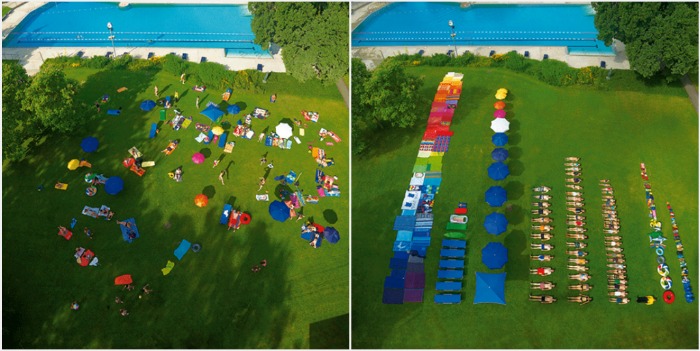 Or the play of our children and ourselves:

Or the possibility of the rhizomatic experience itself: 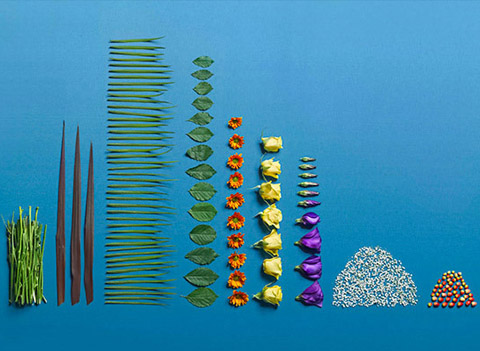 Oh, so much fun… oh, wait, it’s happening all around us…

And then, on the other hand hand, there’s Klara Grancicova, a young artist who uses the simplest, most elegant images to express the puzzlements of contemporary life in a kind of complementary way, I think, to Wehrli.  What was hard to say becomes easy to see. 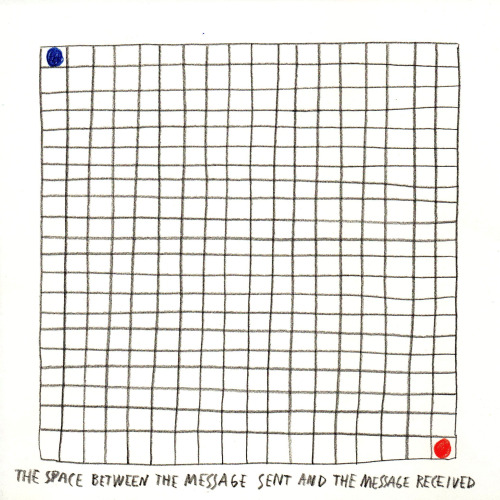 Yet, as people interested in education – the transfer of knowledge from one to another, not the business of institutions awarding certificates, this concept of the difference between what’s expressed and what’s received should be what we wrestle with, and in, not what we become complicit in making reducible. 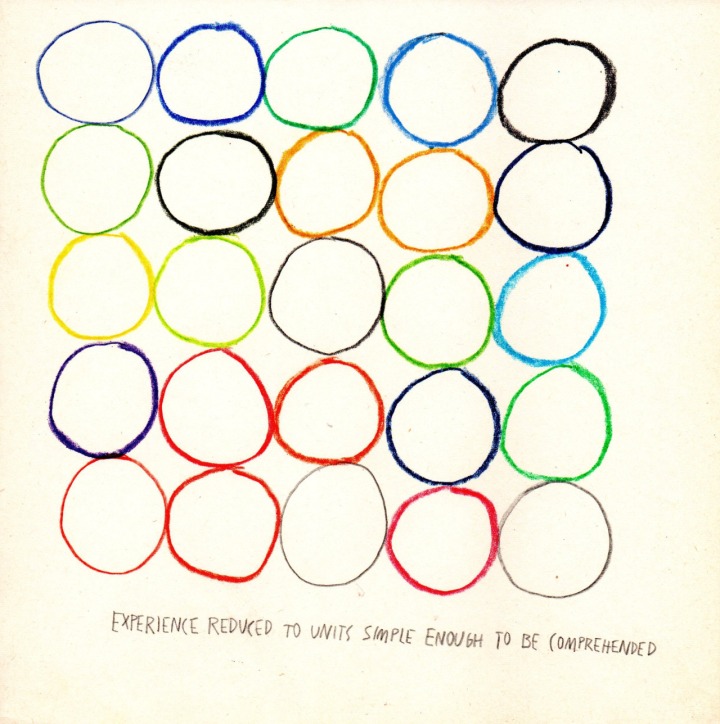 How many paintings are there on the wall?  How many colors are used?  How many words?  Is it that we can only talk about what we can reduce to comprehensibility?

I actually started off this blog posting with a different idea, writing about an artist I hadn’t know about before, Horace Pippin.  Pippin is amazing, and even more amazing when we learn about his life.  Which I learned about last night, from following some link to something and then to something else and then at the bottom there was something that said “If you like this you might like this…” and I clicked on it.

Pippen loved drawing and making art but it wasn’t until he entered a contest and won a box of crayons that he used actual art materials.  The family was that poor.  Once he started, he couldn’t stop, and then he was sent off to war.  He continued to make art in journals about his life there, and prejudices he and others faced, even as they fought for their country.  He was badly wounded and his right hand was  so damaged he could no longer draw or paint, so he began to use his left hand to guide his right, burning lines into pieces of wood with a hot poker.  He was poorer than ever because even the labouring jobs formerly available to him were no longer possible.

His first actual painting after returning from the war, The End of the War: Starting Home, took three years for him to complete and the conditions under which he completed it – the sense of being marginalized after giving up his health for his country, the prejudice he faced as a black man and someone with a disability, the economic and social and psychological pressures – are probably impossible for us to comprehend: 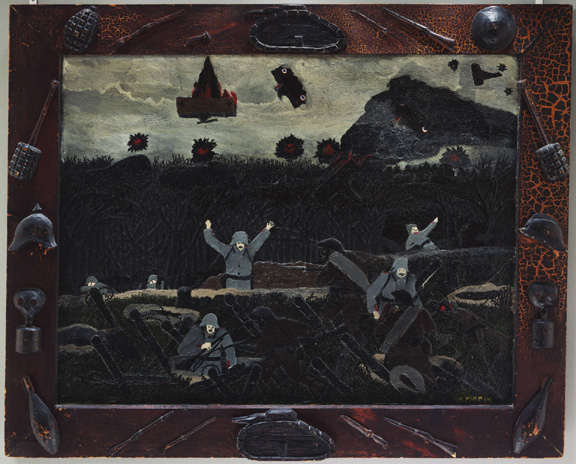 He became well known and respected, in frequent exhibitions, even while his personal life became even more difficult – the whole story is beautifully told here.  At 50 he took his first art class.  His last painting, Man on a Bench, was done in 1946, only 13 years after his first.  So, when I should have been sleeping, I was visiting Howard Pippen.  And then I found this: 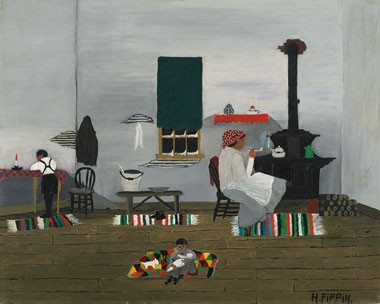 The teaching plan from the National Gallery of Art, Education Resources for Teaches, which reads:

Students will learn about the life and painting style of African-American artist Horace Pippin. They will discover how to “read” the clues in his paintingInterior and write a story about the work. By solving counting and time problems, students will also create their own “secret number” painting.

Teachers then guide a series of conversations that lead to this:

Interior’s “Secret Number”: What number can you find again and again inInterior?

Count the cracks in the walls.

The magic number is 3. Several things appear in sets of three. Can you find other things that appear in threes? (Hint: Can you find triangles in the painting? How many sides do they have?)

Now have students count by threes. Can they make it to 30?

It made me wonder if the teacher at the Coupland exhibit was following a prescribed teaching plan or some generic teaching method for incorporating art into curricula.  With Pippen, the students might then also go on to the last “extension” activity which is to kind of replicate their own version of this Howard Pippen painting – using a limited number of colors (3 or 4 only), covering the entire page with paint, using “simple” pictures of people engaged in home-like activities, by including their own “secret number” for others to discover (later they will exchange paintings with a partner and try to guess this number).  Etcetera.  Pippen was 15 before he got a box of crayons – surely this is different than being instructed to use a limited number of colors? Horridus vacui is the condition of being psychologically unable to not fill the entire space in art brut – and some of the artists talk about how if they left a space, who knows what might erupt from it?  And, then:

Choose a secret number between two and six and draw things in sets of the number they chose. (Remember, sets of three were counted in Pippin’s Interior.)

Include people, furniture, toys, and decorations. For example, for number four, you could include four books, four pets, and four windows, along with any number of other objects and people.

In rhizomatic terms, where is the opportunity for nomadology, for surprise, for emancipation?  “Oh!  You chose the number 7?  That’s a surprise!”  Or, more likely in my experience, “You should have chosen 3 or 4.”

Tracings and maps, rhizomes and trees, nomads and war machines.  The interesting part of a Deleuzean approach is that it is a declaration of war against conditioned, unthinking responses.  In her paper, “Toward a post-identity philosophy: along a flight line with Gilles Deleuze?,” Cécile Voisset-Veysseyre writes:

Here, the postface distinction between “map” and “territory” refreshes the study of A Thousand Plateaus: “The rhizome is […] a map and not a tracing. […] The map is open and connectable in all of its dimensions.”  Tracing is alike to a close representative space, not to an open expansive totality. If Deleuze and Guattari talked about a “guerilla logic” or about a “guerilla warfare” and chose a war vocabulary in their texts (Negotiations, for example), it is because contingency is always a reorder of sense and because “chess is a semiology.” On that point, the influence of Lewis Carroll appears again: “‘The question is,’ said Alice, ‘whether you can make words mean different things’ / ‘The question is,’ said Humpty Dumpty, ‘which is to be master – that’s all.’”  New regimes of signs suppose necessarily a nomadic logic: “If the nomad can be called the Deterritorialized par excellence, it is precisely because there is no reterritorialization afterward as with the migrant.” The patchwork model of the text – text as texture (cloth) and as process – shows that flight lines are the making of undecidable propositions and the producing of events. Sense is direction, it is found in any direction (in all routes).

Some days I am more certain of what such passages mean than other days, and more articulate.  And some days it is enough to think of Humpty Dumpty, “The question is . . . which is to be master – that’s all.”

And, to end, one last Coupland painting: 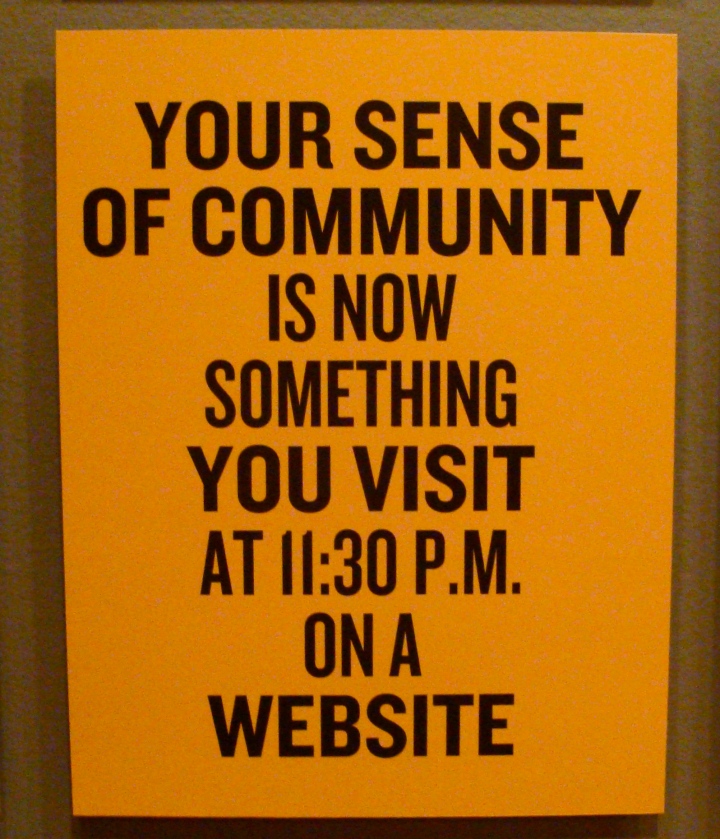 9 thoughts on “what counts? “Lives are no longer feeling like stories.” #rhizo15”